Last night I went to the Smithsonian National Zoo in Washington, D.C. to photograph the ZooLights.  The last time I visited a zoo at night was over twenty years ago to see ZooLights at the Point Defiance Zoo and Aquarium in Tacoma, Washington.

I arrived at my destination earlier than anticipated only to encounter traffic.  Although the traffic and zoo parking were horrible, I was blessed to find street parking a block and half away on a side street.  I walked over to the zoo and let me tell you, it was a zoo at the Zoo.  I did not expect to see so many visitors.  There must have been a thousand baby strollers and a couple thousand children. For a second or so I had one of my “What was I thinking” moments.  However, I had no doubt I would accomplish my mission in spite of the crowds.

I joined up with a group of photographers who’d also signed up for this night photography shoot with Photo Tours D.C. The owner and host of the Photo Tour D.C. educated us on the nuances of night photography.  He then led us around the grounds and found interesting displays for us to photograph.  At each location, he gave us a new camera technique to use while taking photos.  I was able to take some really cool pictures.

Night photography is all about how you use the trinity -ISO, f-Stop, and shutter speed (camera settings).  When photographing at night it is highly recommended that you use a tripod to avoid having noise or blur in the photo.  Taking pictures without a tripod can also cause camera shake, because it’s difficult to hold your camera completely still during slower shutter speeds. In most of my photos I used a shutter speed of 10 sec. Some of the photos that you see below with the starburst or explosion effect were created by either zooming the telephoto lens in or out while the camera is taking the picture at a slower shutter speed.  I’ve included the before and after pictures of those displays. 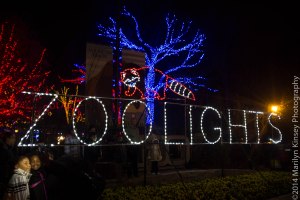 I actually took this picture without a tripod and it came out pretty clear. I had the shutter speed on 5 sec and held the camera close to my forehead and remained as still as possible.

When taking photos at night, especially if the lighting is the same throughout the area or venue, you typically won’t need to constantly adjust your camera’s settings. This scene was captured to help me establish my settings.

Above are the before and after shots of a lighted tree.  The spots on the “after” photo are a result of stopping the lens rotation mid-way while the camera is taking the photo on a slow shutter speed.

Another display with the “before” photo of three objects. 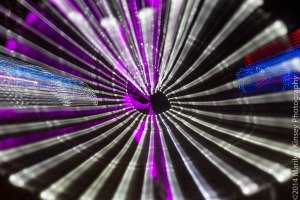 If you look close to the above photo you can still see the outline of the crab and clam. 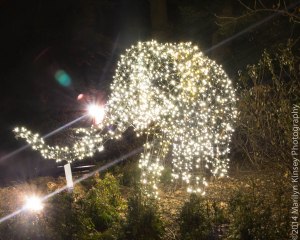 An elephant, before and after.

An elephant family before and after. 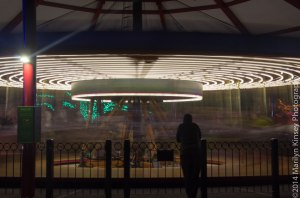 A carousel before and after.

I had a great time at the zoo!

5 thoughts on “What I Did Last Night: ZooLights”