Sunrise. Shortly after this shot, the sun was no where in sight until later that afternoon.

Saturday morning I attended a meetup at the Conowingo Hydroelectric Dam (http://www.harfordbirdclub.org/conowingo.html) in Darlington, MD, to photograph bald eagles. This location is known to have bald eagles this time of year and by the numbers! I’d been anticipating this event since hearing about it several weeks ago. I thought this could be a really cool thing to attend, and I might learn a few things. Prior to the event there was a healthy conversation online amongst members on what camera equipment to use; from what size lens, to the use of tele-converters or extenders, and the best time to secure parking and on and on. I followed the conversation focusing on what size camera lens to use. A number of people shared that you can get pretty decent pictures using a 300mm lens with a tele-converter. I have a 70-300mm lens, so I thought I was in great shape and that I just needed to get a tele-converter to extend the reach. The experienced photographers also discussed what size tele-converter to purchase, i.e., 1.4x, 1.7x, or 2.0x. So I read up on tele-converters so that I would be well informed on my decision to purchase the best tele-converter for my lens and camera body. There were a few cautions in terms of how you may lose sharpness, auto focus may not work and your ISO and f-stops may be impacted.

So I purchased an AF 1.4x tele-converter for my lens and couldn’t wait to capture a bunch of bald eagle photos. I was prepared and excited! I get up before the crack of dawn and drive an hour and 40 minutes from my house to arrive at the dam by 6:30a. I was a little uncomfortable driving in pitch blackness down two lane roads and the only car on the road. I was more than happy to reach the interstate! I arrived in Darlington and continued to listen to the map directions, but I sensed that I was getting deeper and deeper into a wooded area and thought I must  have bad directions. At last, there is a dam down in a very secluded area. When I arrive there are already 15-20 people there. I survey the area and spot a location to set-up my tripod and camera, ready to capture the sun rise before the eagles begin to fly. As the morning progresses, more photographers arrive and they are not just ordinary photographers. They had ginormous lenses! And some people even had on clothing that matched their lenses. They were serious bird photographers. All in all there were about 50-60 people there and most had huge lenses and about six of us had lenses that were a mere 400mm or less.

This is what the majority of lenses looked like!

Been There, Done That!

My experience photographing bald eagles was TERRIBLE! It was in the low 30’s, so I was cold in spite of all of the layers I had on! My fingers were numb! A familiar meetup member walked up to me and said “Hi , how are you” and then said “You look like an Eskimo.” I thought, “You know you are freezing, stop pretending!”, and I noticed he left before I did.  After two hours of waiting and seeing three flying eagle sitings, a fellow photographer offered me hand warmers, which I readily accepted and was grateful for. To my dismay it was ONE warmer and I was expecting it to be the kind that typically fits inside your gloves like his, but upon further inspection it was for the body and it said Do Not Adhere to Skin, so I affixed it to the outside of ONE of my gloves and clasped my hands together. This set-up was not conducive to taking pictures of bald eagles as they zoom by. The directions on the package said it would take 20-30 minutes for the warmers to activate, so after about 10 minutes I had to go to my car to warm up for a few minutes.

Why I Didn’t Enjoy the Experience!

1. It was too cold! I met a couple who’d made a vacation out of the event and had been there since Tuesday! Tuesday! The wife indicated that they hadn’t had the greatest photo experience because of the cloudy weather and that it’s so cold. She said they’ll be happy to get a couple of great shots. That it would be worth it. I left after 4 hours!

2. There were not as many eagles out feasting on fish, so there were long waits. There were two or three eagles relaxing in trees and on rocks as if they knew we were waiting for them to fly.

3. My new tele-converter sucked! Although it was an auto focus tele-converter, I had to use manual focus. Imagine trying to focus while following an eagle. I actually missed a few of the few opportunities just because of manual focus. I couldn’t find or see the bird and had to keep looking for it with my naked eye in order to focus on it.

4. I didn’t get a single sharp picture because of the camera settings I had to use with the tele-converter.

Below are a couple of bad pictures that I’ve included as a reminder to NEVER do this again without a ginormous lens!

An eagle carrying his catch.

Another shot of the same eagle

During the long waiting periods I decided to walk around and take pictures of ANYTHING, as a way to keep the blood flowing. Here are a few more pictures.

An indication of how cold it was! 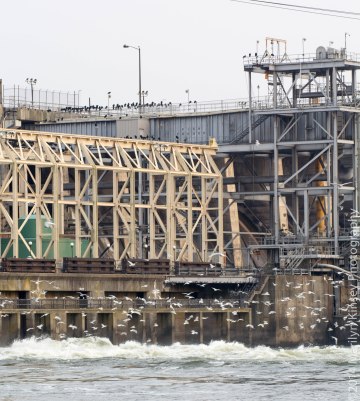 There were what seemed like hundreds of gulls, and if you look at the top of the building there are a bunch of vultures! 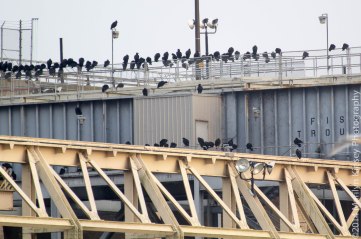 Vultures! A closer look at the top of the building. We were actually surrounded by vultures! 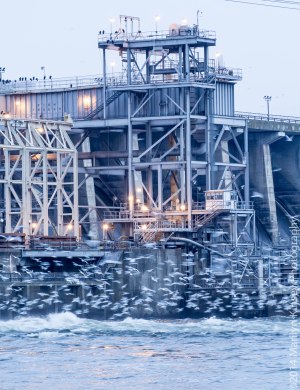 Hundreds upon hundreds of gulls! 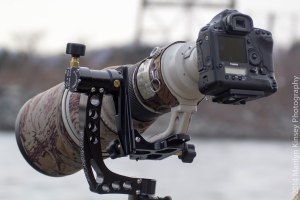 A closer look at a lens.

Serious cropping. This is a fourth of the size of the original photo. This is the eagle that remained perched for a couple of hours!